So I must admit I’m a bit of a hopeless romantic. When I ask someone on a date there is a big chance I’ll go overboard pulling out all the stops including some items M. Stewart probably wouldn’t even do.

A few months ago I asked a guy on a date. I originally thought of surprising him with flowers, but that’s so gay. Whilst on my way to the florist to pick up some periwinkles I passed a bevmo and a light went on! Knowing that the beau loved drinking, I eighty-sixed the flowers and u-turned into bevmo. 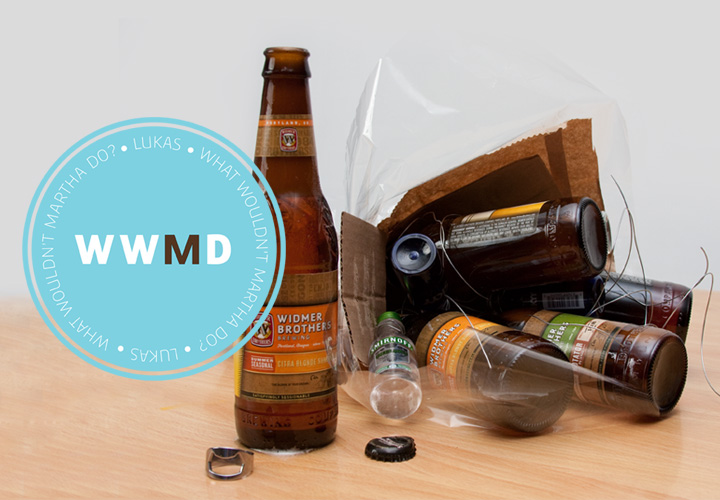 Why not combine the two ideas and create a beer bouquet? I quickly found an assorted pack of Widmer Brothers Brewing Company beer that would make an excellent bunch. Any bouquet wouldn’t be the same without accent pieces, so I decided to buy some small booze bottles to throw in the mix.

Now, all of this seemed like a good idea, but I really had no idea how to put it together. I googled “beer bouquets” online and a few popped up, but most were put together by some straight girl from the south with tackier taste than Sarah Palin.

At any rate I rummaged through my toolbox and found some extra wire and wire cutters. Forty-five minutes and a few sips later I had a pretty good beer bouquet if I must say so myself.

My date didn’t go exactly how I wanted, but I now have the knowledge of how to make this fabulous arrangement. And now my fellow readers, I will share this knowledge with you!

Click here for step by step directions on how to make your own beer bouquet.