And so begins my “Confessions of an A4A Addict” series.

I think I really started exploring my sexuality after breaking ties with C______. My sexual shyness had finally worn off and I was ready to dive deep into the sea of men San Diego had to offer. I was to enter into the A4A arena.

The clock struck o’something AM and I hadn’t fallen asleep yet. I scooted over to my iMac and logged onto Adam4Adam. It wasn’t long before the chime of a new midnight suitor had announced themselves. A quick scan of the stats – 6’0, blond hair, 32 y/o, 7″, vers, safe sex only, neg, ddf, athletic build – “fantastic, this guy works,” I thought to myself.

He proceeded to let me in and directed me towards the boudoir (that’s a foreign word for bedroom and this hookup would definitely prove to be foreign.)

I jumped in the shower and did the all-over-dont-miss-a-spot-youre-going-to-have-sex washing. Hurrying it up now as it was approaching sex o’clock, I dashed down to my trusted college aged white Focus and headed off for the night’s sexual adventure. 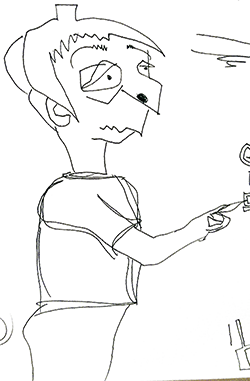 -knock, knock-
I had arrived at the front door of a pretty posh house, you know the kind where you could tell they have a career job and spend the weekends manicuring the trees and rose bushes out front. Anyways, I knocked on the door and my suitor opened. Everything looked good, his pictures were accurate: tall, blond hair, athletic build. He proceeded to let me in and directed me towards the boudoir (that’s a foreign word for bedroom and this hookup would definitely prove to be foreign.)

Now let me paint the picture again, it was already pretty late when I had arrived and I was more fascinated with the house and the poshness of it all than the actual person answering the door. We laid down on the gentlemen caller’s bed and made out for quite a few minutes when all of the sudden he stopped. I asked him, “What’s wrong?” And what happened next was a bit of a shock, but nothing I couldn’t handle. The handsome fellow pulled out his hand, or rather what wasn’t a hand and said, “Oh by the way, I’m missing a hand. I hope that doesn’t bother you.”

I was pretty taken back for a good 20 seconds and I am sure my face wasn’t exactly sexy when I first saw the missing extremity, but after a brief pause I pulled it together. I told the guy I was cool and we continued to make out. 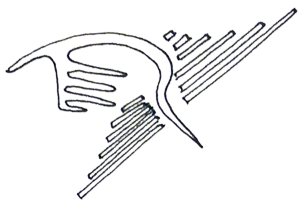 For the next five minutes I could not get out of my head. Thoughts kept racing through my mind, “I wonder if he’s ever penetrated anyone with that arm?” “Am I going to go all the way?” “What else is he holding back?” Needless to say it was hard for me to stay hard given the situation. I kept it cool and we both finished the deed with a clean and safe, but awkward j/o session. 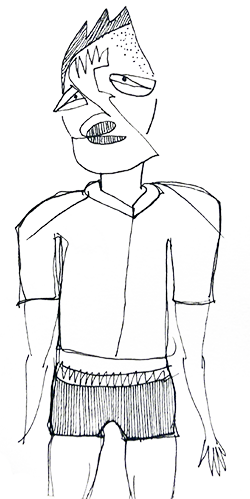 Afterward we chatted a bit, with the guy going on to tell me how he’d lost his hand. It was a childhood story, one I don’t quite remember the details of, honestly I was still taken back by the entire situation. We said our goodbyes and I never heard or saw of him again.

Fast forward to a few years later to a trip to Palm Springs with some coworker pals. We’ve all had a few choice cocktails and started chatting it up in the hot tub when hook up stories bubbled up. I proceed to recite my tale and a great debate erupts.

I took the stance that I was bamboozled. “He should have mentioned somewhere in his profile that he had a missing hand, am I right?” My friends were on the defense of Mr. Hand. “It shouldn’t matter if he had a hand or not. He shouldn’t have to tell you prior.” But I found it to be too much information omitted. What else might he be holding back? His HIV status? A murderous past? I mean, who was I sleeping with?

Do you think Mr. H should have mentioned his hand before the get-together?

Thank you for voting
You have already voted on this poll!
Please select an option!
View Results Hide Results