When online videos go viral, I always have a fascination with how they caught the popular wave. Is it really great material? Were they just lucky and Aunt Marge has an address book of 2,000 friends? Did Perez Hilton tweet it to his 3 million plus followers?

In the case of Jim Hansen, it’s option No. 1. The synergistic energy he has between his actors and writers pours through in his online shorts, which ultimately ends with more than 200,000 views. After contacting Jim via YouTube, I had the pleasure of interviewing him. Here is what the witty L.A. director had to say.

Good Evening, Jim. Thanks so much for taking time to interview with us. Let’s get to it.

First, let me say that I am in love with Chloe, as are most of my friends. What first inspired you guys to pick Chloe as a character to poke fun at and make this series?
I already knew Drew Droege but didn’t know he did this character Chloe until I saw him perform in a show.  He started doing Chloe when he put on a blonde wig and looked in a mirror. I told him that he must come over we are making some super short videos for YouTube; it clicked. But I’m not really sure either of us look at it as poking fun of Chloe Sevigny, maybe more parody or inspiration.

Have any of you actually met Chloe Sevigny or do you just get your material from other video interviews?
I met her once years ago; we have a close mutual friend. She was really cool. Drew met her more recently at a party and they danced around the elephant in the room, never speaking directly about the videos. We only scavenged information from interviews for the first batch of videos (we usually shoot three at a time), and even that was just a few label names that she likes. After that our Chloe got her own stories and started to become her own entity.

Has the real Chloe acknowledged the faux Chloe’s video YouTube sensation?
Yes, I’m sure she hates that interviewers always ask her that now. I understand how awkward it must be to have to respond to these. There is a video online where she watches it for the first time:

(for those of you who have short attention spans, fast forward three minutes in to see this.)

Who plays the faux Chloe and how did you meet him?
I met Drew Droege at gay poker I believe. He is the funniest guy in the room.

OK, enough about Chloe. You’ve got a slew of other fabulous shorts on your website and YouTube channel. I definitely see a pattern of brat pack, popular girl, gay boy click reoccurring in your films. Are you a fan of John Hughes and did he inspire you?
Oh yes, he has seeped into my psyche, definitely. I am probably more inspired by Brian DePalma, like the Fury and Carrie. Also Robert Altman, Bionic Woman, David Lynch and Italian and Korean horror movies. 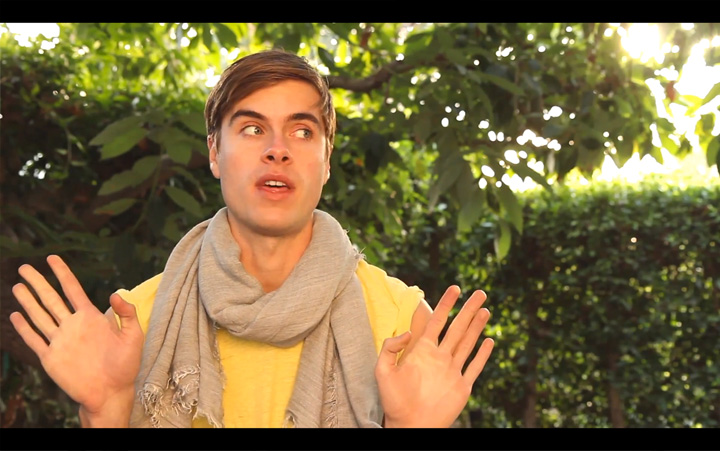 Jeffery Self as Eirik

Is Eirik a take on the typical “L.A. gay” (I giggle when I see people’s names spelled with extra letters such as Eirik)? How did this character come about?
Jeffery Self, who plays Eirik, wrote those six shorts and we shot them all in one day in a friend’s backyard. The original title was L.A. Gay Asshole, but we thought that was too aggressive. Jeffery had just moved here from New York and I think he was just delighting in the differences.

How did you meet the writer, Jeffery Self?
I met Jeffery through my good friend Jack Plotnick at Akbar one night. I shot a video with Jack, Jeffery and Edie Patterson (amazing Groundling performer). After that he pitched me the Eirik videos.  Right at the same time I hired him to act in this series of online videos about gay manners on 365gay.com. He is brilliant; you’ll be hearing more from him. 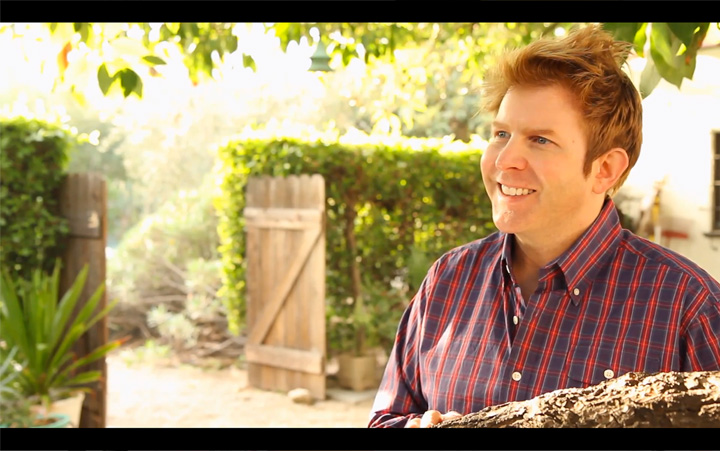 How long have you guys been working together?
We have been working on something or other since October 2010. Right now he is writing a project staring him and Drew that I am directing. And I am writing a project staring him, Drew, Jack, and others from the stable of actors that I love to work with. I tend to cast first then write for the actor.  I love how Altman and Paul Thomas Anderson use the same actors over and over.

Do you find that you and Jeffery have a synergistic energy?
I think he is such a talent. We work very easily together. We are both instinctual and have similar senses of humor. He’s probably going to get a huge Hollywood job really soon and I’ll need an appointment to say hello. Just kidding, sort of.

Which film is your absolute favorite so far and why?
My favorite film of mine is probably Pretty; it’s a drag horror movie starring myself and my friend Christos Prevezanos. It’s the first real thing I made, over 10 years ago, but it touches all the nerves. It’s super raw and cheap but I am sentimental.

I keep remaking it.

What is your muse?
My muse … huh? I think it’s weird, as a gay man without kids and a creative job, my “muse” is that I never have to grow up. I’m such a kid in so many ways. I really can do whatever I want.

What future projects are you working on?
Well, as I was saying, I never have really grown up. For the past two months I have had three giant dollhouses in my living room; 10-feet-long and 5-feet-tall. That’s my next project, Paragon School for Girls. It’s a six episode web series. It incorporates a large cast, drag, murder, mystery and miniatures. But, honestly, I’m already exhausted and I haven’t shot a frame yet.

I have a short film called Video Night that was in Outfest coming out on a DVD compilation early next year; and more Chole videos too.

Jim, thank you for taking the time to give us the scoop on Chloe and all the projects you’ve been working on. We can’t wait to see what you come up with next.

You bet!  Thank you!